William Edward Burghardt Du Bois was born in Great Barrington, Massachusetts in 1868. By the time he posed for this photograph at the dawn of the 1900s, he had earned a bachelor's degree (1890) and a Ph.D. (1895) from Harvard University, studied at the University of Berlin (1892-94), and completed his dissertation "The Suppression of the African Slave-Trade to the United States of America, 1 638-1870," which was published in 1896 as the first volume in the Harvard Historical Studies series. In addition, and a further indication of the prodigious quantity of influential work he would produce during his lifetime, in 1899 Du Bois published The Philadelphia Negro, a monograph in which he set out to "study [social problems] in the light of the best scientific research."

In 1903, one year before this photograph was taken in Boston by the studio of J. E. Purdy, W. E. B. Du Bois published a series of essays entitled The Souls of Black Folks. Considered by many to be the most influential book written by an African American in the twentieth century, Souls begins with the prescient observation that "the problem of the Twentieth Century is the problem of the color-line." Throughout the book, Du Bois returns to two central ideas?"double consciousness" and "the veil"?to illuminate how African Americans negotiate their identities as blacks and as individuals in American society. The book also attacks the accommodationist attitudes of Booker T. Washington, notes the contributions of African Americans to society, and examines the uniqueness of African American culture, intellectualism, and art. 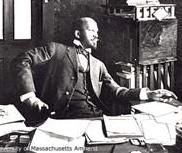 When W. E. B. Du Bois was photographed behind his desk at Atlanta University in 1909, he was forty-one years old and had spent twelve very productive there. Among his publications from that era were the following: The Conservations of Races (1897); Some Efforts of American Negroes for their own Social Betterment (1898); The Negro Landholder of Georgia (1901); The Negro Artisan (1902); The Negro Church (1903); The Negro American Family (1908); and John Brown (1909). Also during his years in Atlanta, Du Bois confronted the grim realities of segregation, discrimination, and lynching in the American South. And he suffered the unspeakable loss of his first-born son.  (Photo University of Massachusetts, Amherst Special Collections and Archives, W. E. B. Du Bois Library)

In 1910, W. E. B. Du Bois left his position on the faculty of Atlanta University to found The Crisis, the monthly magazine of the National Association for the Advancement of Colored People, and to serve as its editor until 1934. His editorials for The Crisis reflect the evolution of his political thought, and they chronicle an increasing concern with international economics and politics, particularly as they related to people of African descent. Thus, in 1919 he helped organize the Pan-African Congress in Paris. In the circa 1920s, when this photograph was taken and when he visited Africa, his chief question was whether "Negroes are to lead in the rise of Africa or whether they must always and everywhere follow the guidance of white folk."

In 1909, W. E. B. Du Bois conceived of editing an "Encyclopædia Africana." Du Bois envisioned the equivalent of a black Encyclopædia Britannica "covering the chief points in the history and condition of the Negro race." He was successful in attracting a prestigious editorial board but unable to raise the money necessary to realize the project. Throughout his life, Du Bois would pursue the idea of creating this encyclopedia. 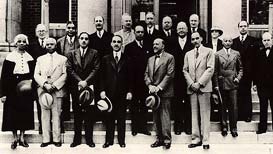 During the 1940s Du Bois became increasingly militant both in his opposition to imperialism and to U. S. foreign policy. In 1939, he had returned to Atlanta University to become the founding editor of Phylon, but was forced to resign in 1944, perhaps in part because of the radical views he expressed in the journal's pages. Now in his seventies, instead of retiring Du Bois returned to the staff of the National Association for the Advancement of Colored People (NAACP). He proceeded to help organize the Pan-African Congress in Manchester, England, in 1945. Although Du Bois was elected the international president of the Congress, it was, in fact, dominated by Africans agitating for independence and particularly by Kwame Nkrumah, the future president Ghana. During this decade, Du Bois published Dusk of Dawn: An Autobiography of a Concept of Race (1940), Color and Democracy: Colonies and Peace (1945), and The World and Africa (1947). One year later, in reaction to Du Bois's very vocal militantism, the NAACP dismissed him, one of its founders, from its ranks.

W. E. B. Du Bois and Carl Van Vechten came to know each other during the Harlem Renaissance. At that time, Du Bois was one of the leaders of the "New Negro Movement," and Van Vechten was a critic, writer, patron of art and literature created by African Americans, and the most prominent white person involved with the Harlem Renaissance. A few years later, Van Vechten developed his interest in photography and made portraits of many of the individuals he had known in the heady Harlem of the 1920s and 1930s. These photographs of Du Bois, made in 1946, are among those portraits. Photos by Carl Van Vechten Van Vechten Trust

The 1950s were trying years for Du Bois as he came under intense scrutiny by the United States government for his involvement in the international peace movements and his open expressions of sympathy with the United Soviet Socialist Republic. Suspicious that Du Bois was a Communist, the U. S. Department of State refused to issue him a passport in 1952 and prevented his traveling abroad until 1958. Once his passport was restored, he and his wife, Shirley Graham Du Bois, traveled extensively in Europe, China, the USSR, and the Eastern bloc. 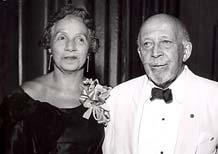 In 1950, Du Bois's wife of more than fifty years, Nina Gomer Du Bois, died. The following year, during which he was indicted and tried on subversive charges brought by the Justice Department, Du Bois married Shirley Graham Du Bois, an author, composer, musical director, playwright, and political activist. Together, they emigrated to Ghana in 1961 on the invitation of that country's first president Kwame Nkrumah. Shirley Graham Du Bois lived there until her death in 1977. 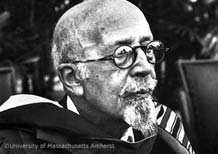 On his ninety-fifth birthday in 1963, W. E. B. Du Bois received an honorary degree from the University of Ghana in Accra. Six months later, on August 27, Du Bois died on the eve of the March on Washington. Martin Luther King, Jr., eulogized the great Du Bois during that pivotal event in the U. S. Civil Rights Movement. 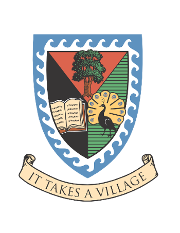